Our nation is being demolished.  Our culture is being fragmented.  Our children are being corrupted.  Our institutions are being destroyed.  Our society is collapsing from within.  Our moral standards have been thoroughly undermined.  It’s an attack on all fronts.  We are surrounded, Patriots, and we are losing.  It is being carried out with malice aforethought. The attack is disguised as other things.  It’s hidden in front of your eyes, right under your nose, in such a way that you will not notice it until it’s too late.  The attack has been unrelenting for quite a few years, but now we’re coming to that moment at which we are going to be overrun.  Ladies and gentlemen, I do not exhort others to violence.  Armed conflict may be avoided for a few moments more, but that window is closing.  If this is to remain a free country, governed by its own inhabitants in the first successful implementation of self-governance on Earth, it is time now to draw near to you all whom you love and hold in high regard, to ensure that they finally know what is being done to them, and how it’s being done.  They will ask about motives. “Why would anybody want to…”  The motive is irrelevant now.  We don’t have time to talk about the “why” of it.  It’s happening.  Right now.  If you and they do not now engage, we will lose the country.  We will go out with a whimper.  The United States of America is under attack, and our time to defend her is now, and we must defend her on all fronts at once.  We are surrounded by enemies.

America is a country, and while people think of countries as being defined by geographical boundaries, language, and culture, the truth is that any country is actually defined most by its law.  The law is a nation’s expression of the meaning and purpose; boundaries and limits; language and culture.  To fully defeat any nation, an enemy must destroy all of those things, but destroy them most of all in the law.  To conquer a country is not so hard if an enemy is able to capture the law.  Ladies and gentlemen, our law is now a hostage held in the hands of a vile throng of black-robed villains who will not observe the law that had been written, but merely re-writes the meaning of the words printed on the page.  This attack had been subtle in its earliest days, but now it is in the open.  Most of us stand by, hardly noticing, but doing nothing.

Robert Mueller is the latest major tool of the attack on the United States.  He is setting the stage for impeachment of the President of the United States.  The Democrats in the House will use whatever he produces as justification for impeachment.  I want you to understand this now: When (not IF) Donald Trump is impeached, this will signal the final phase of the attack on our law and thus on our nation.  I want you to know that upon that moment, I will consider every person so-engaged an enemy of the United States, guilty of treason, and subject to the legal remedies thereto.  It’s not that I love Trump so dearly, but that I know he’s the last man in power over the government who is actually on our side.

Their Army is surging to our border.  For years, decades, they have been smuggling them into our nation in ones, twos, and tens.  They’ve done so by any and every means possible.  This is the army of their communist revolution.  They weren’t quite ready yet.  They hadn’t expected Trump’s victory.  They thought they would have a number of years yet to continue building their army.  It’s now known that since the amnesty of 1986, they’ve managed to smuggle twenty-nine million people into America. That’s an army large enough to challenge any nation on Earth, but it’s also enough to overrule you in every election.  They are on the cusp of thereby capturing the law.  Once they capture the law, there will be no stopping them.  We must stop them now, or the country is dead and will soon be buried.

Yesterday, Speaker of the House Nanci Pelosi(D-CA) was in Austin, Texas, to speak about immigration, among other things.  Among the myriad of ridiculous ideas of the Democrat (treason) Party she discussed, she said this:

“So, when we talk about newcomers, we have to recognize the constant re-invigoration of America that they are, that we all have been – our families…”

“And these newcomers make America more American. And we want them, when they come here, to be fully part of our system. And that means not suppressing the vote of our newcomers to America.”

Do you understand what she’s actually saying here? She’s telling you that they’re not going to wait for the immigration process and the limit that is citizenship in order to permit newcomers to vote.  Do you understand what she’s carefully intimating?  She wants to let illegal aliens vote in our elections.  That is the death of America.  They intend to get all of this done while impeaching the only President who has ever done anything to curtail their plot against the United States of America.

Ladies and gentlemen, if they are permitted to do this, America is over.  Do you understand?  It’s as desperate as that, and if your relatives and friends who generally prefer not to get involved in politics simply lay back and let this go, it’s over.  Within a decade, the country, which many of you already consider unrecognizable from a few years ago, will think you had landed in Guatemala or Venezuela.  There is no gated community in which you’ll be able to hide.  There’s no mountainside bunker in which you’ll be able to hold off the hordes.  This is being done, and if Trump is impeached, there is nobody left to stop it inside of government.  Pence won’t stop it.  As you’ve seen, there is not a single damned Republican in Washington DC who will stop it, unless his name is Trump.

Anybody who tells you different knows what they are telling you is a lie stated in an attempt to put you back to sleep.  Just a little longer.  They just need a little longer, and they just need Trump ousted, or paralyzed.  Your country is being overrun. Seventy-six thousands of immigrants last month! At that rate, your country will be dominated by illegal immigrants in no time.  Then, Nancy Pelosi and her cronies will make voting by non-citizens legal.  They will capture the law, and your country will be wrecked by the law.

Do you understand? It’s happening. They’re doing it to us. They’re using their power to make us submit. Once illegals vote, how long before the Second Amendment and the First Amendment are nullified or even amended out of existence?  It’s not my intention to provide a breathless commentary, urging you to action, but by all that is Holy, it is time for you to gather the family and friends ’round and tell them what’s really at stake.  Show them.  Take the time and show them.  Explain to them.  You have the ability.  My readers are not intellectually insubstantial people.  I know this from the quality of the emails and comments I receive.  You all know what’s happening.  The fact that I don’t particularly love Donald Trump’s past personal conduct is not going to prohibit me from having his back in this war.  He’s the last thing standing between us and the abyss.  He must know we have his back. All we patriots must say so, loudly, now, and with once voice.  We must make it so loud as to strike fear in the hearts of the enemy.  The enemy may not be stayed much longer, but if President Trump calls upon we patriots to defend the constitution, I will respond, as vigorously as my middle-aged body will permit.  We must retreat no further.

I will uphold my oaths. This, I will defend.

Editor’s Note:  A late-breaking bit of news on the legal front as Mitch McConnell now says he’ll use the “nuclear option” to get Trump’s nominees through the Senate. I wonder what sort of concession he’s managed to secure in exchange.  This is why we must support our President, lest he be backed into a corner. 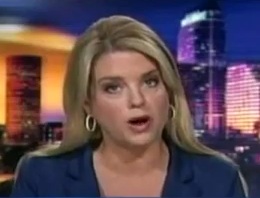 Florida Attorney General Pam Bondi said a mouth-full in an interview with Greta Van Susteren On the Record. She effectively...

Is party loyalty only for the base?...

Obama Will Hold Off On 1967 Borders Until Post-Election

WND is reporting that Palestinean Authority officials who wished for their identities to be withheld told the online publication...