URGENT: The Plot to Bury Donald Trump and America

It was known for weeks that there would be a huge Trump rally in Washington DC on the 6th. A million or more patriots descended on the Ellipse to hear President Trump speak. The swamp was ready.  This was their moment to strike, and they too had prepared.  I cannot now prove every aspect of the allegations I will now make, and the ability to prove it may always evade me, but I know what happened, and millions of the President’s supporters suspect as much too. You’re seeing it unfold in real time. This is a takeover. This is the Great Reset, and this is the real kickoff. The evidence will come along in time, and some of it has been exposed already. My intention here is to lay out what appears to have happened, knowing the evidence is already mounting.  It was a despicable plot, but it was necessary if they were to finally rid themselves of Donald Trump. It wasn’t enough to let him fight his legal fight, and look for political support, in order to attempt to prove his case.  That could not be permitted, never mind permitted to succeed.  They needed an excuse to impeach him again, so that they can forbid him from running again in 2024. They have too much to hide. The skeletons in the globalist closet are too terrible to ever be let loose. Donald Trump is far too dangerous now, never mind four years from now, and in order to protect themselves, they had to be willing to risk it all in their final push to permanently bury Donald Trump and his presidency, punish us for having elected him, and forever bury the truth along with America.

The order of battle was predicated on the President’s speech. They already knew what he was going to say, and they knew quite well that he’d been pressuring Vice President Mike “Pontius” Pence to simply give him the room to prove his case by sending the electoral votes back to the six or seven disputed states’ legislatures for a reconciliation, since a number of them had been asking for as much.  At the time the President was expected to be done his speech, and at which the joint session of Congress commenced its proceeding to count electoral votes, Vice President Pence issued a statement arguing that he hadn’t the authority to simply discount votes from a state or states. The problem is, this isn’t what he was actually asked to do. He was asked to send them back to the states that had requested it for reconciliation by those legislatures and put the session in recess for ten days. This would have put a ten day pause on the vote, but still enough time to dispense with the proceedings well in advance of the January 20th inaugural date.

It appears that the riots were instigated in part by people who were tied to ANTIFA or BLM, and they may have been acting as provocateurs. These agitators actually arrived at the Capitol ahead of the bulk of Trump supporters, because they intended their attack to coincide with the first objection. Trump’s speech ran longer than expected, in part because he had been late in starting. This is why when Trump supporters arrived at the Capitol, people were already inside, and from the available evidence, it looks as though Capitol Police actually let people in some entrances. I have no doubt but that some rowdy but legitimately MAGA supporters found themselves caught-up in the melee, but I also know how these provocateurs operate. They launch attacks from behind peaceful(and often unknowing) protesters, who then unwittingly become the shield for the provocateurs. A police line might then lash out against the protesters nearest them, irrespective of their actual culpability, and sometimes, this will provoke a direct response by the agitated crowd. This is a ploy often used by ANTIFA and BLM, and they well know how to use it, and they’ve spent a lot of time and effort perfecting their art. Unfortunately, many protesters may be unaware of all of this, and may easily fall prey.  Another tactic is for the provocateurs to breach a barrier, a window, a door, or other obstacle, and then lead protesters through, some of whom follow because they’re hyped-up in the moment or because they’re curious about what’s going on, but what frequently happens is the bad guys make their escape, having succeeded in moving a mass of people into the target area. It’s very easy to get sucked into such a thing, and once you realize this, it’s easy to understand. If you’ve ever been in a large, even mildly agitated crowd, you know this to be the case.

The provocateurs led the way into the Capitol. There now appears to be several videos showing the Capitol Hill Police letting them through barricades and into the Capitol itself.  There are numerous witnesses to this speaking out in social media, though the mainstream media and big tech are trying to suppress all of this. (That’s another tell: You wouldn’t try to conceal all of this or suppress it if there wasn’t at least a kernel of truth in the supposition that this was a stage-managed event.) One video is here, while it remains up:

Capitol police open doors for the protestors. They stand aside and invite them inside. pic.twitter.com/OnSd3KGzz5

The media seized upon these events, as if they were waiting for it. Their stories went up so quickly, many people on the ground at the Capitol were unaware of the events when full-length articles began popping up on websites. It’s clear that they had canned stories, perhaps filled in a few details, slapped on a few pictures from unknown person(s) in the building, and pushed them out.

This began the unrelenting media narrative telling the country Trump was to blame. Twitter banned his video telling people to be peaceful and go home that posted within minutes of reports of violence, and the way they labeled the tweet was intended to promote the notion that he had incited the violence. This is a perfectly, entirely false narrative. In his lengthy speech, he actually told people to protest peacefully. He never told a soul to take any sort of aggressive actions, but that is the spin with which the media ran, and is still running.

When Rush Limbaugh returned to the air on Thursday, he began his show with the following, in a foreboding tone, out of the blue:

He paused, and repeated himself. Many were confused by this. I understood his meaning. If he said “one wrong word,” the plug would be pulled. He’d been warned. However else he tried to describe his meaning, I knew exactly what he meant. This was Rush, like the famous footage of the POW in Vietnam blinking in Morse code. The corporate bigwigs in distribution had called. They’d let him know: “One wrong word…” and they’d pull the plug. It was significant enough that Mark Levin called attention to it again on Friday evening, and also made mention of how he’d been warned to call for unity and so forth on Wednesday.

I want you to stop and consider the meaning of all of this. At what level must things be happening that people are calling the biggest talk-show guys and telling them, either explicitly, or implicitly: “One wrong word, and we jerk you off the air so fast, the air will catch fire with the sound of silence.”

Folks, that’s what appears to have happened.

Since the events on Capitol Hill, we have watched a chain of events too surreal even for a Tom Clancy novel. News is basically hot garbage. Whereas before, you could at least rely upon them to get some basic facts straight, or at least ballpark, now it’s all presumptively lies. All of it. They are manufacturing news. They’re making things up just to inflame the situation. Everything is about creating a frenzied  drumbeat. I actually believe that they may even try to take out Donald Trump.

Steve Bannon’s War Room has been deplatformed on Youtube, after he said something Thursday(or perhaps Wednesday,) that challenged the legitimacy of the election.

As I write, the following things have come to pass this Friday the 8th of January, 2021, in rapid succession in a storm of thunderclaps:

This is all happening very quickly. These developments are occurring faster than I can keep up. More may yet happen. Don’t be surprised if the Internet goes down entirely. Don’t be shocked if cellular telephones stop working. Don’t be astonished if long-distance phone calls become impossible. I’m not kidding. Don’t be stunned if for the first time, we see the activation of the Emergency Broadcast System or something similar. We are quickly descending down a rabbit-hole, Expect to be told to shelter in place, either nationally, or on a regional basis. There is no telling where this ends.

Folks, this is not a game. We are watching an all-out attack on America. This is the globalists, the Democrats, the whole DC UniParty, all the Soros groups, the media, Obama is right in there, and the whole maniacal leftist cabal is out for blood. I have many friends who are so shocked by what’s going on, they say this might be the “end times.” We cannot afford to take that view, or it will be the “end-for-us times.” No sir, as long as we live on this Earth, we must be prepared to fight for our rightful place on it. This is not a game. Not any of it. Ladies and gentlemen, this is far worse than I had imagined, only because I didn’t think they had the guts to go for all the marbles in this way.

I continue to be amazed by those who are hanging on to their platforms urging all of us that violence must never enter the political context. I know that they may well be earnest, but again, I ask them a heartfelt, critical question. President Trump said he’s not going to be at the inaugural. If not for the security risk to him and MAGA folk, and if our situation wasn’t so dire, I’d have urged him to go and invite MAGA to troll Biden, by holding a rally on the Ellipse. 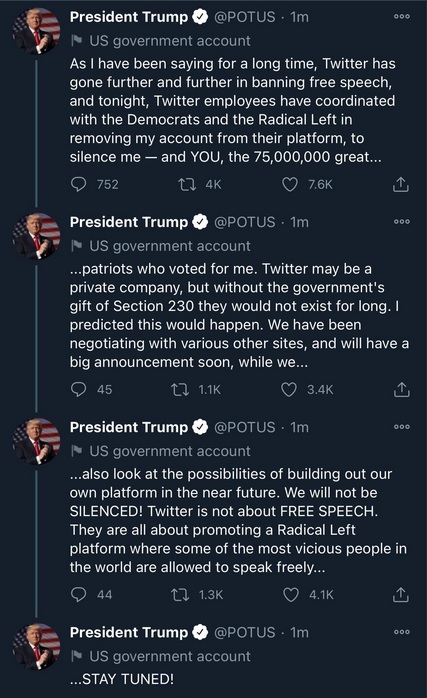 As I was looking around on Twitter, watching my followers fall, fall, fall, I saw this video:

Ladies and gentlemen, whatever happens from here on out, I want you to know I’ve appreciated your readership. I will bring you new articles and information as often as the situation permits, and I have something I think useful to you. Keep your powder dry, but keep it near at hand. This is a volatile situation, the country is rocketing into the abyss, and I don’t know if anybody has the will remaining to stop it.

Editor’s Note: I meant to point out something regarding Parler and the Apple App Store and the Google Play Store. I don’t know so much about Google, but I do know that on Apple devices, you can download FireFox and Brave for free via the App Store. These are web browsers, and you can USE THEM to access Parler(you don’t need the Parler App) and thus access Parler via a browser. It works fine.

Leading us over the precipice......

Allen West appeared On the Record with Greta Van Susteren on Fox News.  He was asked about his opinion on...

Republicans must look outside beltway bubble......