This disease is out of control.  The Biden Administration has been complete consumed by it.  Blue State Governors, and big city mayors have surrendered to it.  Nearly everywhere I look, I see it taking over.  Internationally, it’s consuming the globe, and it shows no sign of relenting.  The disease is a virus, but not of the biological sort.  I see it in Tweets on Twitter, and I hear it on the radio, and I wonder what in the name of Beelzebub is going on in the minds of our people.  The only people employing any logic are the dissidents, who are fighting against the forces of this mental virus.  Dr. Robert Malone termed it “Mass Formation Psychosis,” and that’s as good a name as any, but from where I sit, and in much rougher language, it looks to me as if otherwise sensible people have lost their damned minds. Folks, it’s time to set the record straight on a few things, and give you some “guidance” or direction if you’re among those not overwhelmed by this disease. We must put an end to this, and quickly, before it spirals out of control entirely.  We’re in mortal danger from this disease, and it’s spread apparently through media.  This is my attempt to erect a firewall against it, to “slow the spread,” if you prefer, to give cooler heads some time to prevail. We are headed into the abyss.

To the degree it ever had really existed, the pandemic of SARS-CoV2, a.k.a. “Covid19,” is over. The facts are coming in.  What I told you almost two years ago has been borne out by reality.  It’s being used to drive politics.  The following are demonstrable facts:

Despite all of this evidence, and much more, the government is still insisting upon mandates. All of this is bad enough, but there’s something more insidious going on that frankly causes me to nearly vomit.  None of these facts are penetrating the brains of those afflicted with the sickness about which I intend today to discuss. In one tweet this week, I really had to pause. The actual tweet was eventually deleted by its author, but another Twitter user smartly grabbed a copy of the tweet: 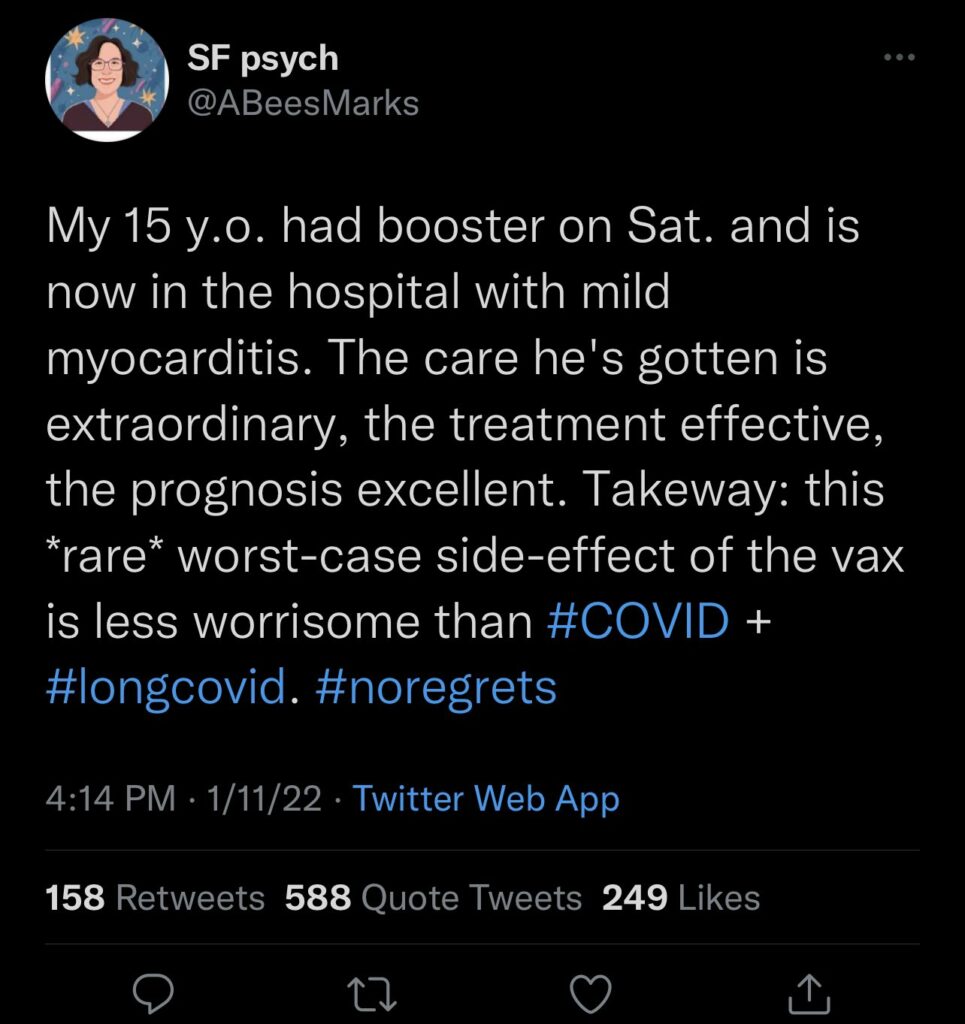 This poor, foolish woman actually thinks COVID is worse than myocarditis in her 15yo son.  She’s tragically wrong, and she deleted her tweet only once it began to sink in that her child’s life expectancy has been slashed to a small fraction of what it had been.  I feel terribly sorry for her, but the truth is that I feel worse for her son.  Thousands and thousands of children have been afflicted with this heart damage due to these vaccines, and yet their parents continue to march their kids in for doses and doses of this poison.  The people doing this to their children have been afflicted with this “Mass Formation Psychosis,” or whatever you’d prefer to term it.  It’s causing other problems too, and one of them is that even in otherwise sensible people, they believe it’s a good thing that there’s still a mandate in effect for healthcare workers at facilities that take federal Medicaid and/or Medicare dollars. The reasoning is absurd.  Consider this imbecile in light of the facts outlined above:

The place my mother is in actually has a 100% per cent vaccination rate!!! The nursing homes in my state have had flu shot mandates for years, no flu shot, out the door you go. Thank you Justice Kavanaugh!

Another lady verbally accosted me for an alleged “attack on the poor and the elderly” when I suggested in a Tweet that the solution for healthcare operations in light of the Supreme Court decision on the mandates for healthcare workers in facilities that take the federal dollars, is for the people who run those facilities to cease accepting federal dollars. According to her, I was heartless and cruel. And an ass. I think she’s a nice enough lady, generally speaking, but I think she’s lost her bearings a bit. Nobody has a right to the labor of others. Nobody. None. No one. If healthcare workers, in abject disgust, simply quit their jobs and walked away, would she demand at gunpoint(government’s gun) that they return?  It’s maniacal.  Under almost any other circumstance, I’m sure she’s a very nice lady. Really. The problem is that this entire situation has left her searching for quick and easy answers, to the extent that she’s willing to cast off morality, or at least to impose one of her own that gives no consideration to the rights of others. More, the people at whom she should be angry are the fools in government.  They’re imposing this obvious foolishness and tyranny.  They’re causing all of it. In light of what we now know, unambiguously, all of these mandates should be tossed aside, because they’re factually, scientifically useless.  That’s the problem.  Why wouldn’t workers and businesses look for ways to be free of these oppressive monsters?  Remember, however, that she considers me the bad guy.

I feel badly for her too, not in a piteous way, but simply because I feel badly for all people who have been led astray.  This entire endeavor, this crisis mentality, and this herd-like movement toward some implausible, or likely impossible goal simply mystifies me.  I don’t understand how people can’t see it. I know they’re in the thick of it. I know they’re somewhat shell-shocked by all of it as this pandemic has turned their world upside-down. So am I, but what’s the difference?  Why could I see that this was being used as a political tool from the outset, while others screeched that it was the end of the world?

I continue to wonder at a simple question: How did the poor fools at Jonestown Guyana follow through with it? They were told to give their children the poison first. As they were watching their children die, they then consumed the poison themselves. Stop and think about this. Once you’ve poisoned your kids, what reason do you rightly have to continue in life? They were talked into this as part of a larger cult-fueled delusion, much in the fashion of Mass Formation Psychosis.

The latest data from the UK shows that since August of 2021, 4 of 5 deaths in the UK attributed to COVID occurred in “fully vaxxed” persons. Since their vaccination rate is substantially less than 80%, it is mathematically certain that your chances of dying from COVID are greater if you’ve been “fully vaxxed.”

They’ve begun to assert what Dr. McCollough and others have suggested: The COVID “vaccines” are damaging the immune systems of recipients in a manner much like HIV. The UK Government’s Health Security Agency has admitted as much in this report.

The willingness to continue accepting these jabs in the face of mounting evidence is a sickness of another sort. It’s a sickness of the mind, and it’s caused by some form of what Dr. Malone termed Mass Formation Psychosis. The media “fact-checkers” immediately tried to debunk Dr. Malone, even though he didn’t coin the term.  Instead, they merely attacked him because he referenced it during the podcast with Joe Rogan, yet what constitutes Mass Formation Psychosis looks very much like what many are experiencing. Here’s Malone during the epic 3-hour podcast with Rogan:

Here’s Bannon’s interview on the aftermath with Dr. Malone:

Despite the attempts by the media “fact-checkers” to try to demolish Malone, it’s clear that he’s onto something. Look around. People are doing the most senseless things: Riding alone in their cars with masks on; On a morning jog in the great outdoors with masks on; unnecessarily vaccinating their children with a vaccine which poses greater risks to their lives and health than COVID ever could; winding up in the ER with serious heart problems while still praising the vaccines. Even MIT researchers have now gone on record as recommending that no person administer these so-called “vaccines” to their children.

At the same time, the vaccinated are running around screeching at the unvaccinated, particularly those who contract COVID. They wish death on the person, and all of that nonsense. This is how far the Mass Formation Psychosis has become embedded:

I’ve gotten a few DM’s hoping that I die because I’m unvaccinated and have COVID.

Yet, they think they’re the good guys.

One the subject of villains who think they’re the “good guys,” a new Rasmussen Poll finds a majority of Democrats want to punish the unvaccinated. It’s typical. Democrats represent, all together, maybe thirty or thirty-five percent of the population, but the media advances only their narratives. If you’re independent, forget it, and if you’re a conservative, they don’t consider you human. This is the ultimate key to demonstrating that the Covidiots, or Mask Covidians, are precisely the people who helped Adolph Hitler exterminate the Jews in a gargantuan demonstration of Mass Formation Psychosis. The key is creating a bogeyman. For Hitler, it was all the “undesirables,” like Jews, Gypsies, Homosexuals, and ultimately, anybody who didn’t fit the bill.  In this case, the “Unvaccinated” is becoming that class. It’s fine to discriminate against them. It’s fine to imprison them, torture them, take their property, their children, and ultimately, as we shall see, their lives. Look at what’s happening in Australia, and lately, Canada, as well as Europe. Have no doubt whatever that if we did not retain(for now) our right to keep and bear arms, we would already be in an equally abominable place. This Mass Formation Psychosis is a different kind of disease, and the only vaccine effective against it is to stand, speak, and oppose it. That relies upon you. Whether you’re vaccinated or not, you must reject this monstrous agenda. It must be stopped, and in the long run, the people responsible must be punished.

Editor’s Note: It has now become a cliché that one who reaches for Hitler as a comparison to contemporary events has somehow “jumped the shark.” I ordinarily have sympathy for that idea, inasmuch as I think comparisons to Hitler and the Nazi Reich are too frequently used, often inappropriately, in ways that tend to cause the tragedy of that era to be lessened in the comparison, diminishing the grotesque crimes against humanity that were committed.  That’s all true, and yet now, staring into this abyss, I see that all the signs are there, and they are flashing red. What all of this should tell us is that if we’re to avoid descending with finality into this sort of abyss, we must raise our voices now. We must take a stand.

Shaking a Fist at God While Rooting Against Tim Tebow

I listen to leftists talk about Tim Tebow as if he is evidence that conservative Christians are mad. It’s not...

Trump Hammers Cruz as “Maniac” But Looks The Part Himself