The American people are reeling. Something is dramatically wrong, and the American people, even those who don’t pay close attention to public affairs and politics, are today wondering what in Hell is going on in Washington DC, but I repeat myself.  There’s a good deal to unpack in this episode, but there are key facts we must know. If you don’t know these, or haven’t linked them, none of it makes sense. Why is the DCMafia going after Donald Trump now?  What did they hope to find at Mar-a-Lago? Before describing to you what I think is part of the answer, I want you to watch this interview with Kash Patel and Devin Nunes on Maria Bartiromo’s show(H/T Sundance from theconservativetreehouse.com):

Nunes lays out a chronology of events, stretching back at least from the Obama administration. This is key. All of these things(and many more) are related, but I want you to think about a number of things that seem to be a shared feature.

In every case, all of the people linked to Trump who’ve had their doors kicked in at zero-dark-thirty have had search warrants executed, and it’s clear that the charges ultimately brought against these people were trivial compared to the nature of these charges. I want you to now consider a related, somewhat parallel timeline:

As Bongino observed on Monday’s radio show, and on his podcast, in the interview above, Patel points out that it’s all the same people. Lisa Monaco, and others, all operating inside the DOJ, are all the same people who were operating there before. Why? Because they’re on the hook for all of it. The very real truth is that these people may be on the hook for treason, and more. They can’t let Trump become President, but no matter what, they must never permit any of the information President Trump tried to declassify from to coming to light.  Traced and tracked to the bitter end, this information reveals treason throughout the US government, and all over Washington DC.  This isn’t a search for evidence about Trump’s alleged criminal mis-use of classified documents. This is all about impounding evidence that will cook the DCMafia, and ultimately, silencing any witnesses.  Is Durham almost concluded?  Will there soon be no further reason to retain some of the declassified documents?

This is why the search warrant has a broad scope, covering the entirety of Trump’s presidency. This is why. Just like in the case of Manfort, Stone, Giuliani, and all the other people they’ve raided, this is not about gathering evidence. It’s about impounding it, and keeping it forever sealed under the label of “ongoing investigation.” Hunter’s hard-drive? They can’t account for it. They impounded it. They intend to disappear it, just like they did with media and hardware taken from Epstein’s NYC mansion.  I’ve been insisting that this is the purpose of all these raids and investigations since I first noticed the trend in late 2018.

Do you get it yet? They have to disappear the documents, and I expect they intend to re-classify it, and probably hide it for a half-century. In the mean time, because of Durham, some of the data, some of the most damning info, hasn’t been released. This prompts another question: Is Durham part of this? By essentially impounding some of these de-classified documents as part of his “ongoing investigation,” he’s delaying its disclosure. This is giving the FBI time to round up any copies, including those at Mar-a-Lago.

I’ve always believed Bill Barr was merely a clean-up fixer for the Deep State, recommended to Trump by the same people who brought John Bolton into the administration. By appointing Durham, Barr basically made sure that none of this info would come out until the investigation is complete.  This would mean that Durham’s job isn’t to convict the dirtbags, but to ensure they get away. Think about it.  Paul Sperry reported over the weekend that a number of the people involved in the raid of Mar-a-Lago were also tied to the Spygate scandal. He was subsequently suspended by Twitter without explanation. 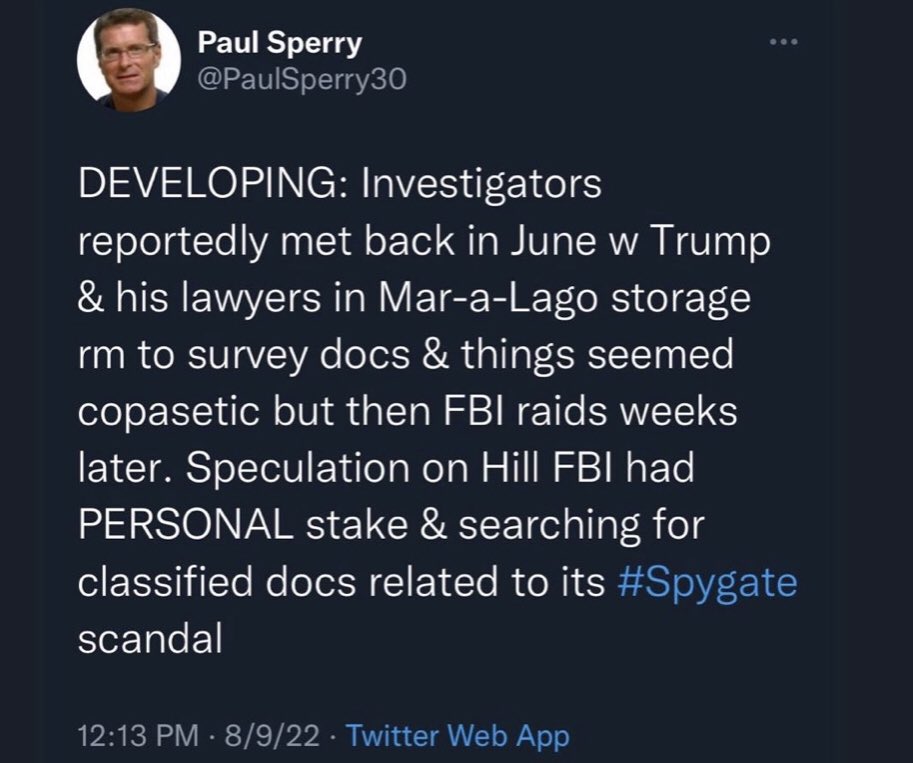 For more details on what Sperry’s been revealing, see this article.

Are you beginning to see the point?  This means that once they have all the information impounded, they will move to make Trump go away, by one means or another, so there’s no chance he can ever get back into office and fully disclose this information to the public, never mind fill the Justice Department with people of the temperament necessary to clean this up and make it stick to the criminals.  They’re going to arrest him and Epstein him. Or they’re going to claim he wrestled with a Secret Service agent in the back of the Beast and was killed. They are setting him up, on way or another, and after they cart him away, you will never be permitted to hear from him again.  That, or the Iranians will conveniently make good on their threats against Trump.

Our [legitimate] president, Donald J. Trump, is in mortal danger.

I’ve asserted repeatedly, here on this site, and on other platforms that there is no limit to what these people will permit themselves to do.  They aren’t even attempting to hide it any longer.  There, in front of you, is an obvious plot to conceal their crimes, frame the man who can expose them, and bury it all(and him,) so that they and their masters can evade justice again. Do you wonder why Merrick Garland looked and sounded as though he was to break out in tears?  He wasn’t nervous.  He was terrified, but worked himself up to face the moment.  He knows with precision what his part is, and he’s playing it. The Raid is a cover-up. The evidence of treason is real, but it’s theirs – not his.

In order to increase ease of accessibility, the venue for the Restoring America Rally in Waukee, Iowa, September 3rd, has...

Here’s the funny part:  At this point, I’m inclined to believe him.  More, there is a backlash brewing among conservatives...

The Myth of Gingrich “Unfavorability” Exposed

In a story certain to raise a few eyebrows, and sure to anger the GOP establishment, CNSNews is reporting on...